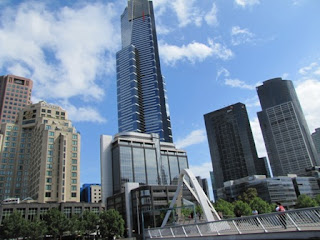 I am on the Edge…on the Sky Deck of the 88th Floor of the Eureka Tower in Melbourne, Australia- the second tallest residential building in the world. Each apartment had an original price tag of A$7 million just for the empty space; purchasers were required to fit out the apartment at additional cost.

On the last ten floors is gleaming 24 carat gold lining the windows reflecting the sunlight on to the glass. A lift hurtled me here in 38 seconds… it’s like being in an aircraft and your ears go pop! Two lifts exclusively service Eureka Sky deck 88. The fastest lifts in the Southern Hemisphere, they travel at over 9 meters per second. For a white knuckle ride I get in to a 10 feet cube of frosted glass cantilevered THREE METRES outside the building. There are a lot of fearsome noises and dramatic soundtrack, after which the glass clears and whew- I find myself suspended on the edge of the building looking down at the abyss- the futuristic galleries of Federation Square, the lazy meander of the Yarra River and the Victorian enclave with leafy gardens. 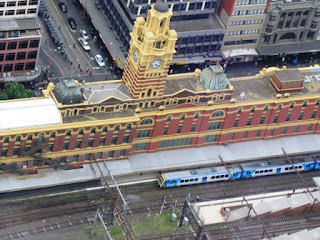 Why the name Eureka? That was the rebellion that took place in 1854, during the days of the Gold Rush in Ballarat, when the miners rose against repression and sowed the first seeds of democracy. The gold crown represents the Gold Rush and the red stripe the bloodshed. The blue and white of the Eureka flag runs across the building. The top of the building can flex in the winds up to 600 mm. And there are two gargantuan water tanks on levels 90 and 91 to counter any swaying… As I walk out of the building I notice a swarm of giant golden bees above the entrance.. art work representing people living in a community like a hive? 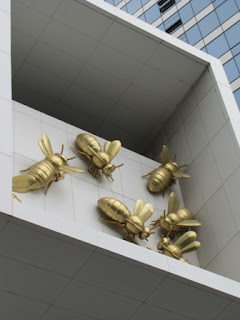 Sky deck 88 strongly recommends that you do not ride ‘The Edge’ if you have any of the following conditions:
• Fear of Heights
• Fear of Enclosed Spaces
• Sensitivity to Loud or Sudden Noises
• Pregnancy
• Heart Problems